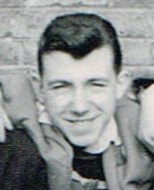 News of Mick Rumsey was first received from his Cousin following our efforts to find more former members via Facebook; but sadly this was to say that he had died in his ‘new’ home in Australia in 2014

Mick had been one of the original members of the original ‘Stage Craft Group’ that, around 1955/6, had met once a week after the normal school day. Along with his peers Mick Everett, Iris Moorshack, Brenda Chapman, Keith Elliot and Maggie Cox, he was one of those who played such a key part in encouraging many other pupils to get involved and contribute to what was fast becoming a permanent and popular feature in the life of the school. It was also, and increasingly, contributing to what both Les Smith and Cyril wanted for all their pupils – for them to be creative, grow in confidence and to learn about teamwork and taking responsibility. Mick therefore played a part in laying out all that the Drama Club was to become and achieve

Mick was one of a very small number in his year group who opted to ‘stay on’ at Markhouse; also being in almost ‘at the beginning of this’ He was in the second group of pupils to take part in this ‘‘experimental’ project at Markhouse which enabled them to sit external examinations; an opportunity that up until then was only available to those who had passed the 11 plus and gone to the Borough’s Grammar or Technical Schools

Given the small number in Mick’s group he, along with the rest of his class of 6, often found themselves sharing lessons with the next (and larger) group that were joining Les Smith’s grand experiment – there having been a comparatively ‘massive’ number of 19 pupils in this third group!

Mick’s daughter Vanessa has been in touch from Australia and it was interesting to learn that he had initially become a French Polisher in his early life in Australia and that in his latter years he worked as a Carer with the Disabled. Vanessa also told us that she always thought of him having a ‘good heart’ – a part of his character that was well shown both in his work as a Carer and how he chose to donate a lot of his pay cheque each week to many organisations who he felt needed his help.

We understand from Vanessa that she lost Mick very suddenly and unexpectedly as a result of heart complications; just a day after visiting him with her daughter

Along with being an absolute wizard playing (and improvising) on the Recorder he also founded the School’s own ‘Skiffle Group’ – at a time when some of the other ‘required’ instruments were pretty cheap – but still effective – to get hold of – e.g. Washboards’ and the Broom handle and tea chest version of a double bass!

Mick’s most noted Drama Club performance was as Ambrose Applejohn in the 1961 Pirate adventure of the same name. As with most of the productions from our early days, there are no photographs of this or any of the other productions that he was involved in – so we have used the above extract from a fuller version on the Website; this taken around 1960 with other ‘Staying On’ pupils in the Boys Playground

*With thanks to Sandra Lipscomb & Vanessa Mills