Cathode Elysium Lights was another ‘member led’ initiative that widened the range of the Drama Club’s activities and took those involved, and their ‘special effects’, into the wider world of mainstream pop and rock music!

CEL was originally set up in 1969  by Dave Paulding, John Oatham, and Terry Hooker,  all Markhouse Drama Club members, with Sid Worth joining the group a short while afterwards.

John recalls that the princely sum of £30 was ‘negotiated’ as a start up grant from Les Martin at the Marsh Street Youth Centre and this, plus a weekly sub of ‘six bob’ from each of the group, enabled them to buy some projectors and start to do some gigs – mainly at discos and at live bands shows.

Whether or not John, Dave, Sid & Terry had any idea of how their new enterprise would develop from this modest start is a moot point – but develop it certainly did and they clearly made their mark within the lightshow fraternity – even to the extent of still having their name featured in ‘Pooters’ – ‘Light Show Hall of Fame!

During the time in which they ran Cathode Elysium Lights, the group performed in a good many well-known establishments including the Marquee Club, the Roundhouse, Quaglinos, Temple – Whisky a Go Go, Rainbow and the 100 Club. Their gigs were, however, not just confined to these well-known London establishments, as they also worked in venues somewhat further afield including, amongst others, Reading University, The Cambridge Corn Exchange and a whole host of different clubs, pubs and private venues around the Home Counties.

Appearing at these venues was not their only claim to fame as a good number of well-known DJ’s and Bands also features in their CV – with the former including Keith Skues, Simon King, David Hamilton, Simon Bates and Noel Edmonds – amongst others.

By all accounts getting to and from venues with an array ‘projectors’ in hand proved an interesting exercise in the early days – particularly given the ‘normal’ early hours of the morning finishing time of most of their gigs! Perhaps, with luck, John may be persuaded to use the website’s ‘Members Memories’ page to recount the story of their often used overnight shelter in one of Liverpool Street Station’s Telephone Kiosks – whilst awaiting the early morning St James Street Express!!! 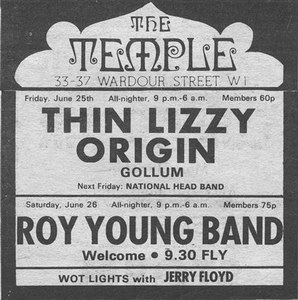 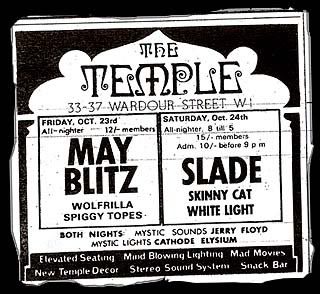 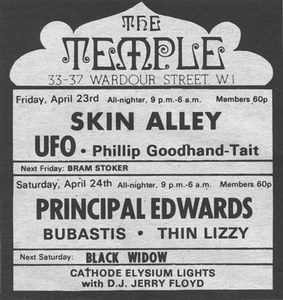