At around the same time as the long overdue ‘follow up’ to the 2007 Drama Club Re-Union was being discussed, the sad news was received that Hilda Malyon had died, in Bangor, on Christmas Eve 2011 – just a few years after Cyril.

Hilda – always referred to with great affection as ‘Mrs M’ – had been a strong supporter of the Drama Club and many former members had been ‘fed, watered’ and counselled by her over the years – and, of course, just like Cyril – she had always taken a keen interest in how their lives were faring – both during and after their active involvement!

Although such a sad time, it was at least good to know that both Cyril and Hilda’s ‘contribution’ would soon be ‘shared’ at great length at the forthcoming Re-Union – so it was perhaps not surprising that the thoughts of many former MDC members turned towards the enjoyment and achievements of those earlier years – how much fun it had been, of lasting friendships and great productions (if not performances?) and perhaps for some, like myself, how the experiences of that time shaped so much of the future.

Having seen many others who have worked with young people have their ‘contribution’ recognised in an ongoing way, I had often felt  it a pity that this had not happened in respect of Cyril’s work with us; although I suspect that had such an idea been suggested his likely response would have been that ‘knowing how much we had valued the Drama Club, was recognition enough’.

However, it was soon evident that similar thoughts were going through Jennifer and Alec’s mind – and it only took a few seconds after their question of whether we should set up a Trust to offer young people the same experiences that we had enjoyed, for me to say something along the lines of – ‘yes, let’s do it’

This seemed an appropriate and tangible way of recognising Cyril’s work and perhaps this is no better summed up than in Jennifer and Alec’s introduction in the Information Pack about the organisation that was subsequently formed. In this they wrote: 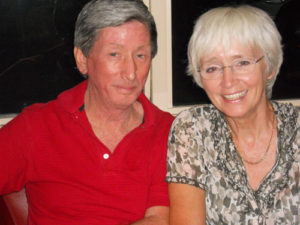 ‘Since his death we increasingly felt that for such a well thought of father and mentor, there should be some way of recognising both his work and life and of continuing the memory of this; also that this should linked to the actual ‘young people’ he thought so much of – you, the former members of the Markhouse Drama Club.

We feel that a fitting way of doing this is to give other young people the opportunity of improving their lives in the way that our Dad did through the Drama Club. This would be something we know he would be very happy to see happen.

We therefore took the opportunity to discuss our ideas with a number of former members when we visited England in August 2012, as well, of course, enjoying the time in talking about the experiences that we all shared in those past times.

In view of the encouraging response we received we decided to go ahead and establish ‘The Cyril Malyon Memorial Fund’ with the sum of £10,000 to be used in memory of his work with the members of the Drama Club. The Fund will be used to support several different pieces of work with young people over a limited time period’

As both Jennifer and Alec lived abroad they took ‘totally unfair advantage’ of my earlier response of ‘yes, let’s do it’ and asked me to co-ordinate the development of the Memorial Fund – and gain the support and involvement of as many former members as possible; both in setting up the ‘organisation’ as well as in the activities that we hoped would eventually be developed. This reminded me of the very easy – impossible to refuse – way in which their ‘Dad’ had always been able to ‘encourage’ us to take on new challenges!

An offer that could not be refused!

The interest from the meeting with Jennifer and Alec resulted in Denis, Norma, John and, a little later June and Peter, agreeing to be on the Steering Group. Of course, Dick – being our long serving archivist and ‘membership secretary’ had no choice in the matter – he, his contact list, his web site and his almost continuous commitment to the memory of the club and its former members – was ‘in’ – and clearly central to the success of what we hoped to achieve. Dick, of course, needed little persuading!

During the remainder of 2012 the CMMF was formed with its aims, operation and financial arrangements put in place – with Jennifer and Alec only really setting out two things that they wished us to build in – which then became the overriding criteria on which the work was founded.

The first of these, not surprisingly, was that the funding was to be used to enable young people to experience the performing arts and to enjoy and learn from their involvement – especially in terms of becoming more self confident, creative, being able to take responsibility and work as part of a team.

This specific purpose was seen as being vitally important because, as Jennifer and Alec wrote, this ‘reflected exactly what our father sought to achieve in his work with the Drama Club Members.’

To fulfil this aim it was decided to fund a range of ‘Activity Projects’ with the performing arts experience provided through youth drama/theatre groups and youth clubs or educational, voluntary, community and neighbourhood organisations that worked with young people. The maximum amount of funding for any project was set at £1200 with the hope that this would enable a good number of former Drama Club members to become involved

A flexible approach was taken to the range of activities that would be acceptable and recognised that any organisation, and the young people involved, would have differing ideas about what they wished to undertake – perhaps ranging from a single area of skill/experience in drama, singing, dance or in technical activities such as stage make up, lighting etc, through to something more substantial such as a ‘theatre in education’ project or in supporting a production.

A project might therefore be aimed at a particular group of young people within an organisation’s membership – or at all of them. Similarly, in terms of duration, this might just be a ‘one off’ session or perhaps something more ongoing – such as a two/three day school holiday period project, a weekend course or a number of one session a week over a longer period of time.

In addition to the funding of projects, the opportunity was also offered for young people in a youth drama/theatre group to apply for a Grant for something specific to their drama/performing arts skills, interests or future productions

The aim of this was to challenge the young people to think creatively about what would be of help to their organisation; also for them to gain experience in both completing a Grant Application and, as part of the learning process, presenting this to representatives of the Cyril Malyon Memorial Fund

Whilst this form of financial support did not, unfortunately, attract any interest, it still remains as part of the CMMF funding structure for future applications

The Link to Drama Club Members

The second funding criteria was that the young people participating in the activities should, in some way, be ‘linked’ to former members of the Drama Club – either being within their immediate or wider family – and be involved in a local youth club, drama/theatre group, neighbourhood or community project – or as a student within a school or college etc.

The ‘link’ could also be directly with any of the above types of organisation in which a former Drama Club member, or indeed a member of their wider family, was involved in some way – perhaps as a volunteer, a sponsor or just as a supporter of the activities or services they provided.

Whilst this criteria clearly limited how the funding could be used, it was seen as a vital as it retained a relationship between the Malyon family and those ‘young people’ with whom their father worked – and whom, along with ‘Mrs. M’, they thought of as part of their ‘extended family’.

The terms and conditions which the organisations providing an Activity Project would have to meet were also set out – thereby ensuring that the CMMF financial resources were only awarded to those that met all the child protection, legal, insurance and financial requirements deemed as ‘good practice’ in working with young people. These also ensured that the activities were ‘monitored’ whilst in progress and that a Report and Accounts would be submitted at the completion of a project – also that a pictorial record would be made available for future use by the CMMF

With all of the above organisational framework in place, the CMMF Information Packs were sent out in January 2013 to those former members of the Drama Club who were contactable at that time.

The CMMF Activity Projects became a reality in summer 2013 with the first of these taking place in a disused Church in the middle of Colchester. This was then quickly followed by another in a Park and a Police Station Cell in Harwich – with the ‘linked’ former Drama Club members being Val Trevellyan (Poore) and Ray Aylott respectively.

These initial Projects, along with the further six that followed over the next two years, are set out in more detail in the following record of the work of the CMMF.

Read about, and see the Photo Galleries of, the CMMF Performing Arts Activity Projects