Somehow or other, Dickie Dunn, the Drama Club’s intrepid and original archivist, was either given, or managed to acquire, a full copy of ‘The Headmaster’s View of Events’ – the ‘essay’ that Leslie Smith wrote in 2002 about his time as the Headmaster of the Mark House Secondary Modern School between 1957 and its closure in 1966.

Fortunately, but not surprisingly, Dick took due care of his copy and this has now been passed on for inclusion in the Drama Club’s Website – albeit not the whole of its 90 pages! 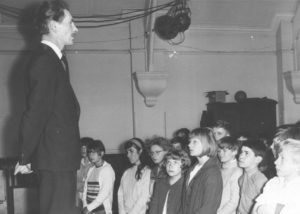 Along with a Walthamstow Guardian Newspaper Report of his appointment, these few extracts include  the ‘Preface’ that sets the scene of Les Smith’s approach and aspirations as the Headmaster; along with several other pages that relate to some of the initial challenges that he faced, some of the the staff at that time and , of course, the advent of the Drama Club and some of the key ‘events’ that are most likely to be of interest to former members!

Alternatively, if you would like to know even  more about ‘your’ education at the school during this period, and this absorbing account of ‘education’ in the post war years – the Education Act of 1944, the ‘Baby Boom’ (of which we were part), the effects of the 11 plus exam and the issues surrounding selective education at that time – as well as all the changes that came about at Mark House – then the entirety of this ‘social history’ is well worth the read.

The initial chapters put the above changes into context – they recount the pressures, and sometimes cynicism, facing those, like Leslie Smith, who challenged the almost ‘discriminatory’ labelling and negative effects that much of ‘the system’ had for the majority of young people. His account shows something of the passion that must have driven his aim of ‘ revitalising’ the school along the lines of a ‘Community College’ and, most importantly, that it should become a place where the ongoing development of a young person’s potential was paramount – rather than what he appears to have perceived as an untimely and unhelpful ‘one off’ judgement of this at 11!

Fortunately there were plenty of other educationalists around him who enabled him to make the journey he envisaged – alongside, of course, the teachers, young people and their parents, who wanted to accompany him!

This initial set of extracts/pages are as follows and have the more relevant sections highlighted within a blue box. Some pages have also had photographs added to remind readers of the members of staff mentioned. 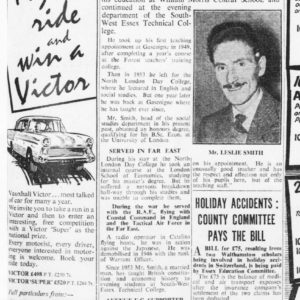 If you have enjoyed these few extracts from this fascinating account of ‘our’ time at Mark House and would like to read the full version – then leave a note to this effect on the Website Contact Page or on dm2013cmmf@googlemail.com and a copy will be emailed to you