I thought that I ought to start this Newsletter with the well-used phrase of ‘how time flies these days’ – as I have just realised that is a year since many of us met together at the Royal Forest Hotel and that the next Re-Union, subsequently planned for some eighteen months ahead, is now only a few months off!

However – in addition to a very enjoyable Re-Union the year has also seen some really successful projects undertaken through the CMMF, although all these have, of course, been overshadowed by Dick Dunn’s sudden death in December.

This really sad event meant that most of our recent attention has been centred around doing something to mark Dick’s very specific and key role within the Drama Club – something that we hoped would both complement, and continue on from, the Memorial Concert that his family staged at the beginning of May.

The latter event proved to be something really quite special. This was not only in terms of the number of family and friends who attended, or the number of past and ‘present’ students who performed so well and spoke so warmly about their friendship with Dick – but also about what was revealed in relation to both his musical ability and career – which had developed far far more substantially than certainly many of us (having not heard him play since around the early 1970’s) had anticipated.

Much of the reason for this is because Dick was such a modest person and I suspect that even those friends who had been in close contact with him over these years would probably not have heard much from him on this front – although it is quite clear that he would have had a lot to ‘boast’ about – albeit that it if had decided to recount his achievements, it would have been done in his very characteristically quiet and low key way!

For some reason or the other I had rather thought that the ‘performers’ at the Concert would all have been relatively young – but this certainly did not prove to be the case. There were a good number of ‘under 21’s  but also a good number of ‘over 21’s’ who were students from generations past who wanted to take part and, perhaps more importantly for them, to also say something about Dick – how they felt about him as both a teacher and a friend – and how much they had learnt from him. Several of this number had ‘left’ Dick and gone on to become professionally involved in the musical world and their performances reflected the wide range of routes that they subsequently taken – from the opening numbers by two musicians from The London Symphony Orchestra, through organ music, ragtime, Elton John, Dylan and Simon & Garfunkel songs, show tunes and back to the classical numbers – including one former pupil playing Dick’s own favourite piece – Mozart’s Piano Sonata in C

I left the Concert regretting that I had not heard him play at first hand – neither in the intervening years since the Drama Club ended or in these last few years since the Re-Unions and the formation of the CMMF had brought us back into regular contact. I know that I was not alone in this thought and, on this ‘note’, it is good to now be able to confirm that Vivienne has agreed to provide a DVD of him playing, which will be linked to the forthcoming Drama Club Website

Some 140 people attended the Concert and a sum of £1400 was raised which Vivienne and Dick’s Family have donated, in equal shares, to Cancer Research and Macmillan Nursing.

Since the early circulation of our Interim Report one further CMMF Project has been completed, one has been ‘topped and tailed’ and one is still at the planning stage – the latter being the funding of a pilot scheme to be set up by Jenny Manser (Lepley) to develop a Youth Theatre in Aylsham in Norfolk.

This was originally planned to follow on directly from the Thornage Hall Project that Jenny had run last September but, as was reported earlier, this was unfortunately delayed through her being away from work for a while. When I recently to Jenny she told me that she was about 75% of the ‘way back’ – so only another 75% to go to get back to her normal 150mph level of activity!

So, whilst we await a revised schedule for this it is good to be able to report on a successful project in Deal in Kent – arranged, with thanks to Carol Austin (Hagger) and her contact at the DEALites Drama Club.

The project was titled ‘EX-Cite’ and provided a group of 14 young people with a week of drama, dance and singing workshops based at the Astor Theatre in Deal  – with these culminating with performances at a number of locations in the town and then, ‘on Stage’ in the really atmospheric setting of the theatre itself.

Unfortunately the weather on the last day had other ideas and so almost all of the street performances had to be cancelled – but, whilst disappointing for the young people involved, it did not detract from their overall enjoyment of the experience or inhibit their enthusiasm for the finale in front of family, friends and ‘yours truly’ – duly armed with a ‘Box Brownie’ and shaky camcorder!

What was really pleasing about this Project was the clear sense of teamwork, commitment and fun that had been developed within the group of young people; also the range of work they undertook and, that for most, this was their first experience of this sort of project.

We received some really positive feedback from a number of the youngsters, and their parents, for enabling this project happen. It was also good to hear that a number of the group had subsequently approached the Director of the Astor Theatre in regards to joining their Youth Theatre – so clearly some longer term gains from our input!

The young people in the CMMF Performing Arts Project – ‘ExCite! – on stage at the Astor Theatre, Deal.

Also – our earlier Project at the Croydon Youth Theatre ended up with a couple of ‘unused’ sessions at the end of the Introduction to Acting Workshops (due to the Tutor being unwell) and they therefore sought our agreement to reuse these at a later date – this time with a ‘Shakespeare’ theme – which we readily agreed!

The revised sessions took place last month and were attended by some 14 young people – some for the first time and some who had attended the earlier introductory workshops. The results of these sessions were really good – with the young people working on a number of scenes from ‘Othello’ with a specially adapted script covering both the ‘original’ version and a modernised re-write – with the latter used to help the group understand the work more fully before trying their hand at ‘Will -The Quill’s’ own immortal words! The picture shows dear old Desdemona having just been killed – so nothing serious! 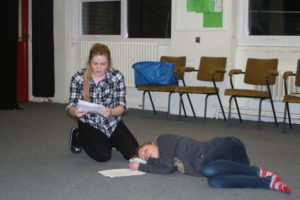 AND – Just a Reminder!

As noted in the information circulated before xmas, there is still some project funding available – so if you have an idea about a possible activity, or some form of ‘link’ to a young person(s) or group that might be interested in a performing arts project – then please get in touch with me – just to chat it through!

Over the past several weeks we have been speaking to Vivienne, Dick’s partner, about the future of the ‘walthamstowhistory’ website that he managed over many years – which, as you will probably be aware, contains both the Markhouse School, the Drama Club and Markovian Films Memorabilia – with links to the CMMF and the Re-Unions having been added more recently. The site also includes ‘My Early Memories’ – a fascinating personal insight by Dick – along with links to his other passions of Buses & Trains!

The initial hope was that this site could be continued in its present form and that the Drama Club pages could be managed, updated and maintained by ourselves. However, whilst there are ways of doing this, it is now quite clear that setting up a separate ‘Markhouse Drama Club Website’ is the best option – and this is what the CMMF Steering Group have decided to do – under the leadership of John Otham. The Walthamstow History website will, of course, continue in its present form until November and we hope that this will give sufficient time for some of Dick’s other friends to continue the site if they so wish.

In terms of our intended site, the breadth of our current ‘membership’ fortunately enables us to access almost all of the memorabilia on the existing site, plus a good deal of ‘new’ material that has been salvaged from various attics over the past couple of years. We also now have copies of the 3 Markovian Movie Films and, of course, the Re-Union photographs and all of the new pictures and movies emanating from the CMMF Projects since 2013 – so the new, distinct, Markhouse Drama Club website will be quite sizeable.

Over the next several weeks all of the nuts and bolts of setting up the Website should be sorted out, as well as some drafting of the possible layout and content. In addition to the Re-Union and CMMF material we think it likely that the site will include a history of the Drama Club, listings and pictures of as many of the productions that can be remembered and possibly something about former members – subject of course to protecting the anominity and ‘innocence’ of all concerned!  As intended from the outset, the Website will be dedicated to Dick and the role he played in maintaining the original memorabilia and contacts – and as noted earlier, there will also be a link to the DVD of him playing and his ‘My Early Memories’

So – more of this in due course – BUT – if you have any ideas and/or artistic/creative skills that could be used in developing the content on the website, its design – or in the setup, running and/or editorial side of it, then please get in touch with John or myself – or join us at our next meeting which is to be held at 11.30am on Tuesday 30th June at The County Hotel, Duke Street, Chelmsford. (5 minutes from the Station)

In the meantime – Best Wishes & Regards

A quick browse at the Premier Inn Hotel at the Royal Forest Hotel rather suggests that it is now fully booked, but the Website is showing availability at their Buckhurst Hill, Waltham Abbey and Edmonton Hotels – which are all pretty accessible. There is also a Holiday Inn at the Crooked Billet – plus a 10 bed Self Catering Ex Scouts Ridge Tent at Gilwell Park (Bring your own Sleeping Bag & Towel)