Alan may, or may not, choose to accurately recall whether he played the front or rear end of the Camel in the 1970 production of Dick Whittington, but he quite understandably recalls the events of going with Ray Aylott to collect the costume from Charles Fox – the theatrical costumiers – in Central London – by car!

“we collected the costume and as Ray drove around Trafalgar Square I decided to wind the window down and shove the Camel’s head through it – much to the amusement of the crowds – and our own – so much so that  Ray decided that everyone deserved an encore – or two – and drove around the square a few more times until ‘the boys in blue’ began to take a bit more attention – at which point Ray decided to head north!

Great times together – that was Ray for you” 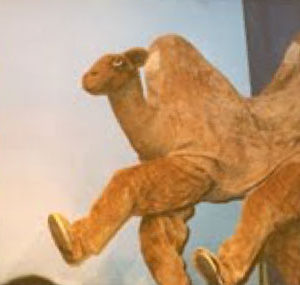