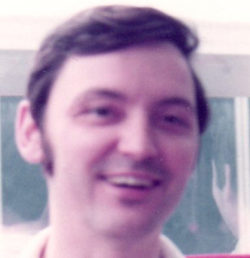 ‘There is nothing like a Dame’ was written in 1970 by Gordon Aylott, who was a long standing, very accomplished and loyal member of the Drama Club. Amongst his many attributes Gordon had a very clever sense of humour – as is well shown from his ‘programme notes’ for the 1970 production of Dick Whittington – where, along with his role in the cast, he doubled up as House Manager – no doubt just to help save on the wage bill!

It is hoped that the inclusion of this in the website will, for those who were members at the same as Gordon, bring back some fond memories of him, his friendship and of all that he gave to the Drama Club over many years

‘There is nothing like a dame’ – so goes one of the hit songs from South Pacific, but could also be well said of any pantomime!

Playing the Dame is a very difficult role, not just because of the acting involved but, just imagine fellas, putting on your wifes gear and going in front of the public! Would You? This year the pantomime introduces Denis Heath as the ‘fair lady’ of the show. He is probably the tallest dame we had had and this mounted some problems in trying to obtain the costumes. However, with the help of some industrious females in the cast – and our costume department – he has been able to overcome this – as you will see from tonight’s show!

If you have been a regular visitor to past pantomimes, just try to cast your minds back and see if you can remember our past Dames in whose traditional footsteps Denis is now following. Give Up!  Well, remember ‘Babes in the Woods’ with Dave Morgan playing our very first Dame. Dave is now a full time youth worker and although he can no longer appear in our productions because of his work commitments (and because w wouldn’t let him), he has helped  considerably in our scenery department and put in a lot of hard work to help he crew meet our deadlines. He also played the Dame in the following two years pantomimes of  ‘Old King Cole’ and the epic ‘Captain Blood’  which he co wrote with Barry Elliott and half of his collection of ‘Goon Show Records’

After Captain Blood we performed ‘Aladdin’ with Richard (Dick) Dunn as Widow Twankey. Dick will be seen tonight on ‘your’ side of the curtain trying (in vain) to make our singing sound better, although with his new electronic organ, those in the front row will probably be all that can hear us (did I hear someone mutter ‘good’!)Following Dick there came the ‘shapely’ form of Alan Sandiford to adorn the female attire of Old Mother Hubbard – in which he proved such a great success in ‘Little Miss Muffett’. Also in drag in that particular production was Ray Aylott as Matilda. These two seem inseparable for tonight they team up again as two idiots (type casting) for the first act and the front and rear ends of a camel for the second – and for that you have to be good friends!  (See Note*)

If you ask any of the aforementioned what it was like portraying the opposite sex, they would tell you that they enjoyed it once the show was in progress but that it was quite nerve racking to begin with. So spare a thought and give a thought to tonight’s Dame – I’m sure that he will be grateful.

This,  our sixth pantomime, is beginning to make some of us ‘senior’ members feel a little older. Those that have entertained you in all of the previous pantomimes and who are also in tonight’s show include: Valerie Poore, Gordon Aylott, Ray Aylott, Alan Sandiford and John Cade.

And – a special welcome tonight must be for Barry Elliott who is playing the part of the Alderman. Barry, as you know, is one of our senior members who appeared in earlier pantomimes but then became a professional entertainer down in Devon. He came back to London looking for work (quite like Dick Whittington!) and although we have given him some he still insists that he ought to be looking for work where he gets paid. So if Val Parnell is in the audience tonight!!

*See Alan’s Memories of ‘The Camel’