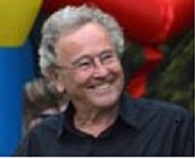 John’s thoughts about the new website included some interesting snippets of information about his time at the Drama Club – all well worth being recorded in the ‘memories’ pages!

One was of how he originally got involved when his sister Pat, already an established member, invited (or persuaded?) him to take one of the vacant ‘walk on/walk off’ parts of a Roman Soldier; which, as the DC never got around to performing Shakespeare’s’ Julius Caesar, sounds as if this was in either the ‘’Town that had a Pageant’ or in ‘1066 and all That’; or indeed in a panto – where all sorts of characters would appear, regardless of whether or not they were related to the plot!

However, whether persuaded or cajoled, history tells us that John agreed to take part and, as he recounts, he joined a ‘military cohort’ of two – alongside someone who he didn’t know at the time – but who later played a big part in his life – Ray!

‘As with most members, I made steady progression to greater things and, probably in ‘The Pageant’, I remember being with Bob as part of the back stage team – running big square scenery flats down the rear (narrow!) passage-ways, turning them around so the reverse side showed and then rushing back to slot them into channels that we had made – part of my apprenticeship I guess

I also recall playing a wizard in one play and was duly sent, by Mr Malyon, to a place in London to learn about stage make up.  I had the warts, a long nose and horrid spots – and also learnt to project my voice.  When it came to the play and getting the Kids up onto the stage, I decided to indulge in some unscripted ‘happy fun’ with them, but ending up almost frightening them to death – after which it took ages to settle them down as the rest of the cast tried to get back to the script!

Before the next evening’s performance Mr Maylon (Ed Note: no doubt in his usual gentle and kind way) said ‘John – please do not do that again’.(Ed Note 2: although we might suspect that he had actually laughed as loud and long as the rest of the cast!)

John’s email about the website also filled a nagging gap in the Drama Club’s chronology of the  plays, and more particularly the pantomimes, that were staged in its final year or so.

‘The list missed one Panto we did, although I cannot remember which year – but it was one that Peter Lee, my Sister (Pat), Jill and I wrote.  The reason behind this was that we could not find a script with enough characters – the club had got so big by that time so we took it upon ourselves to write one to make sure everyone got a part!

As far as I recall the pantomime was based loosely around the story of the Three Musketeers. This must have been towards the end of the DC, because I didn’t do much after this – as  Jill and I married and we moved to Kent; ending up living about ten houses away from Peter and Maggie!

We did join a Drama Club in our new area, but it was never the same! So we left – but have been more than pleased that somehow or the other our ‘thespian interests’ have been carried on – and at more loftier heights, by our two sons – Mike and Dave – all because of a Roman Soldier!

It is this time of year (December) that I most miss the DC – getting ready for the Panto!!!!’