The main part of the article relates to the Junior Competition in which Marsh Street Youth Centre/Drama Club did not compete – but, as the ‘Marsh Street Wins’ sub heading shows – they not only competed, but also that one of the 2 teams that entered this Annual Competition, also captured the trophy – and a place in the Essex County Finals later in the year! 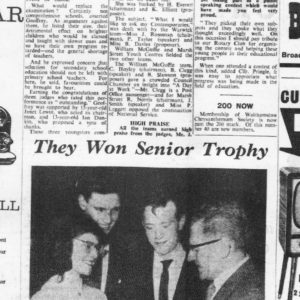 ‘Four teams competed in the senior section. A Marsh Street Youth Youth Centre team was judged the winner of the Rotary Club Challenge Trophy for this second, with Warwick a close second

Iris Moorshack zipped through her ‘My views on Co-education’ claiming that it was natural that boys and girls should learn of each others points of view in the classroom, and so equip themselves for an adult life

She was backed by M Everett (chairman) and Keith Elliott (proposer).