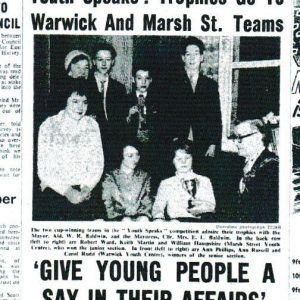 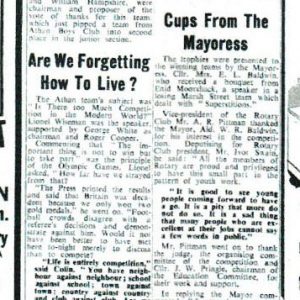 ‘Angling’ was the subject that won the Junior Cup for the Under 16’s Team from Marsh Street Youth Centre. An angling fan himself, 14 year old Keith Martin was the main speaker.

‘Angling is a very relaxing sport’ said Keith. It helps to calm the nerves and gets you away from the rush rush world. It is less dangerous than any other sport, and anyone can do it, no matter what age or handicap

‘It is a sport for rich or poor men, although the poor man cannot afford expensive equipment and will fish how he can,’ said Keith. ‘For me this sport is top of the league and I wish more people would take it up’

Two 15 year olds, Robert Ward and William Hampshire, were the Chairman and Proposer of the vote of thanks for this team which just pipped a team from Athan Boys Club into second place in the Junior Section.

Second in the Senior Section was a team from Marsh Street Youth Centre. Raymond Bailey spoke on the subject’ A policeman’s lot is not a happy one’, with Raymond Turner as Chairman and David Thorpe as vote of thanks proposer.

‘’A Policeman’s lot today is far worse than 50 or 60 years ago claimed Raymond Bailey. ‘The police used to be respected. They could give a youngster a cuff around the ear instead of taking him to court. They also used to get co-operation from parents’

‘Now their hands are tied’ he declared. ‘They cannot hit anyone and are told by parents to mind their own business. Now they have the added multiple troubles of cars on the roads’

Cup For The Mayoress.

The trophies were presented to the winning teams by the Mayoress, Cllr. Mrs E L Baldwin, who received a bouquet from Enid Moorshack, a speaker in the losing Marsh Street team that dealt with ‘superstitions’