Both of the newspaper clippings shown in the memorabilia from this joint School and Drama Club production of ‘Alice in Wonderland’, were originally featured in the ‘walthamstowhistory.com’ website run by Dickie Dunn – who, as shown by the names in his ‘Lighting Plot’ copy of the script, was clearly in his usual backstage role with the ‘ancient’ lighting board – ably assisted, as also noted, by Cleve Edmundson!

Click on the images to enlarge, scroll and see captions 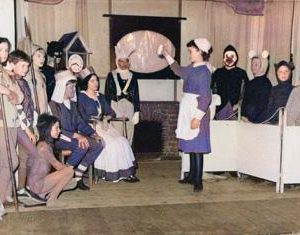 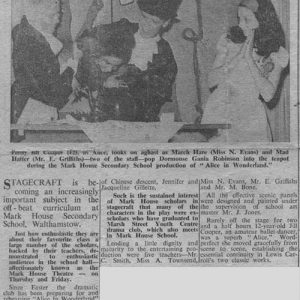 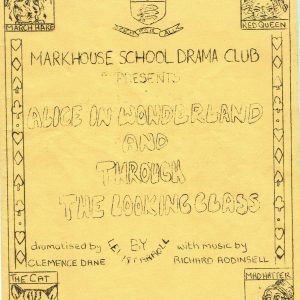 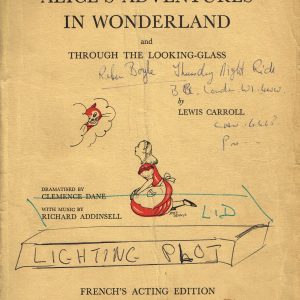 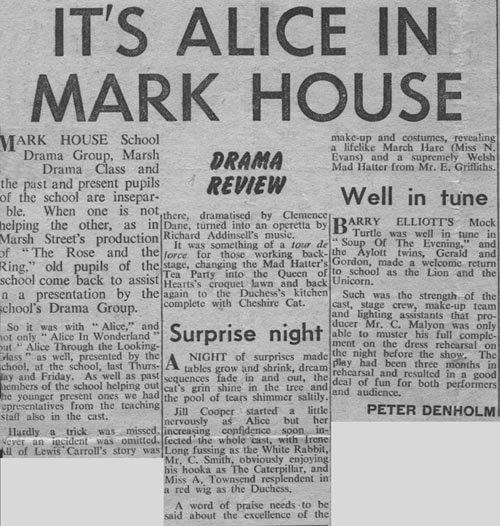 Just how enthusiastic they are about their favourite class a large number of the scholars, backed by their teachers, demonstrated to enthusiastic audiences in the school hall – affectionately known as The Mark House Theatre – on Thursday and Friday. Since Easter the dramatic club has been preparing for and rehearsing ‘Alice in Wonderland’ and ‘Through the Looking Glass’. The productions were a tribute to their enthusiasm and ingenuity.

King-pin of the production was the director-producer Cyril Malyon. He helped to create the clever scenic effects when Alice grows larger and smaller – a table which rises as if by magic and a rotating door, alternatively large and small

Seventy costumes were made by the Needlecraft Mistress Miss Marjorie Kett and a number of girl scholars. Two of her chief aides were British Guianian twins of Chinese descent – Jennifer and Jacqueline Gillete. Such is the sustained interest of Mark House scholars that many of the characters in the play were ex scholars who have graduated to the Marsh Street Youth Centre Drama Club which also meets in the Mark House School. Lending a little dignity and maturity to the entertaining production were five teachers – Mr C Smith, Miss A Townsend, Miss N Evans, Mr E Griffiths and Mr M Bone.  All the effective scenery panels were designed and painted under the supervision of school Art master Mr J Jones.

Rarely off the stage for two and a half hours was 12 year old Jill Cooper, an amateur ballet dancer, a superb ‘Alice’. Word perfect she moved gracefully from scene to scene, establishing the essential continuity in Lewis Carroll’s two classic works.

So it was with ‘Alice’ and not only ‘Alice in Wonderland’ *********** ‘Alice Through The Looking Glass’ as well, presented by the school, at the school, last Thursday and Friday. As well as just past members of the school helping out ***** the younger present ones, we had representatives from the teaching staff also in the cast

Hardly a trick was missed, never an incident was omitted. All of Lewis Carroll’s story was there, dramatized by Clemence Dane, turned into an opera by Richard Addinsell’s music. It was something of a tour de force for those working backstage changing the Mad Hatter’s Tea Party into the Queen of Heart’s croquet lawn and back again to the Duchess’s kitchen complete with Cheshire cat

A night of surprises made tables grow and shrink, dream sequences fade in and out the cats grin shine in the tree and the pool of tears shimmer saltily. Jill Cooper started a little nervously as Alice but her increasing confidence soon affected the whole cast, with Irene Long fussing as the White Rabbit, Mr C Smith obviously enjoying his hooks as the Caterpillar and Miss A Townsend resplendent in red wig as the Duchess. A word of praise needs to be said about the excellence of the makeup and costumes, revealing a lifelike March hare (Miss N Evans) and a superbly Welsh Mad hatter from Mr E Griffiths

Barry Elliot’s Mock Turtle was well in tune with ‘Soup of the Evening’ and the Aylott twins, Gordon and Gerald, made a welcome return to the school as the Lion and the Unicorn

Such was the strength of the cast, stage crew, make up team and lighting assistants that Cyril Malyon was only able to muster his full complement on the dress rehearsal on the night before the show. The play had been three months in rehearsal and resulted in a good deal of fun for both the performers and for the audience

Cast – Alice Through the Looking Glass