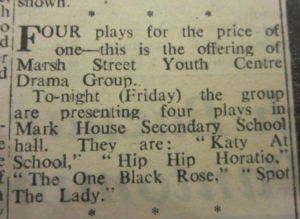 As is shown in this very brief clipping, ‘Four Plays for the price of one’ is the first line of this ‘historically helpful’ extract from the ‘What’s On’ column of the December 1962 edition of the Walthamstow Guardian Newspaper.

Unfortunately there was not an actual report of the performances in the following week’s edition, but nevertheless this piece of memorabilia does, at least, add to the Drama Club’s overall listing of productions

‘SPOT THE LADY’ by Douglas Bryce-Pitt

What is particularly interesting (the historically helpful bit) is that the above newspaper report confirms that Douglas Bryce-Pitt’s version of Macbeth – ‘Spot The Lady’ – was not only one of the f”our plays for the price of one’ but that it was also the second performance of what was eventually a three production run over a two year period!

The first production was in March 1961 and the third a month after this present performance – in January 1963 when it was the Drama Club’s entry in  in the Essex Youth Drama Festival!

So – a previously forgotten fact of being the only play we produced three times – but a fact that is perhaps not really surprising because of its hilarious script and fast and furious pantomime style format that was so enjoyed by both cast and audience alike.

The performance at our ‘home’ venue no doubt served as a timely piece of planning and preparation for the ensuing competition – with, it seems reasonable to assume, the same cast in each. So – in the latter respect the cast confirmed in the programme of the Essex Youth Drama Festival just a month later is also listed here.

‘KATY AT SCHOOL’ by Susan Coolidge

It is thought that the title of this particular play was one of the very earliest in the series that the author produced; but without sight of our programme or a script it does make it a little uncertain as to whether we have it right title – albeit that it is quite clearly noted as ‘Katy at School’ in the Guardian extract. Depending on which website is used there appears to be at least two other similiarly titled books; these being the very first book of ‘What Katy Did’ and then a later one of ‘What Katy Did at School’.

However, given that we now know at least two characters and one MDC cast member from this production and that the latter definately recalls that the play takes place in the Dormitory of a Boarding School, it seems more than reasonable to assume that what we performed was one of the two that has ‘School’ in the title.

Besides the obvious inclusion in the cast list of ‘Katy Carr’ herself, the only other character that it is presently possible to confirm is that of ‘Rose Red’ who was played by Iris Suffolk – who also thinks that Iris Sangster, Dorothy Austin and Linda Dewy were also in the cast. 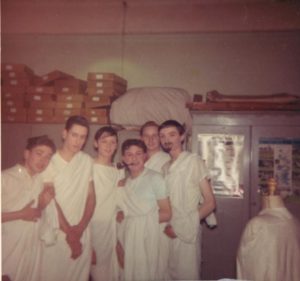 Kenneth Tydeman’s, ‘Hip Hip Horatious’ was an equally funny and quirky play to stage as ‘Spot the Lady’ and was similarly much enjoyed by its cast – so much so that with hindsight it may well be that these two productions began to sow the seeds of thought that MDC productions over the festive period ought to be Panto’s – which did, of course, soon came to be the case!

Excepting this single photograph of some of the cast of ‘Hip Hip Horatious, no other memorabilia has been found of the Drama Club’s production of Kenneth Tydman’s One Act ‘mini drama’ of life in Ancient Rome. The absence of a programme or helpfully ‘marked’ script therefore leaves an unanswered question of whether the 6 toga clad plebians, as shown in assorted bed-sheets, were main characters or ‘the baying mob’. The latter probably looks more likely – especially the headless one in the foreground!

However, despite these unanswered questions, Wikipeadia provides a ‘read worthy’ humorous and interesting outline of what it describes as a ‘rumbustuous parody of Macauley’s poem Horatious’; along with the character list which is reproduced below. This account also suggests some really hilarious passages and lines – apparently all in short rhyming couplets – amongst which, it states, the baying mob was not demanding ‘bread and circuses’ – but ‘beer and bingo’

Given that this photograph features Barry Elliot, Fred Page, Gordon Aylott, Dave Morgan, Jim Braid and Gerald Aylott the thought that they were indeed the ‘Baying Mob’ as suggested above – or as more formally noted in the following character list – the ‘Friends, Romans and Countrymen’ etc – all with ears – except of course the one in the foreground who had obviously already ‘lent them’

Unfortunately no memorabilia has been found for  ‘The One Black Rose’ – nor, as yet, the name  of the author