The script of Richard Tydeman’s ‘Red Hot Cinders’, describes the play as a ‘potted version of the Cinderella pantomime’ – just the thing for your Christmas Party, Summer Fete, Club Night, Night Club, Curtain – raiser, hall – emptier, Drama School, Revue Item, Prologue, Epilogue and a hundred and one other occasions – in fact, the very thing you have been looking for, to put on with the very minimum of preparation.

The Scripts also states that the play, apparently all written in rhyming couplets, should last about 35 minutes – so it seem’s likely that the MDC have presented ‘Red Hot Cinders’ as part of an evening of One Act Plays – perhaps in December 1962 where there is some evidence that there was such a production, but where the content is presently unknown – perhaps time will tell? 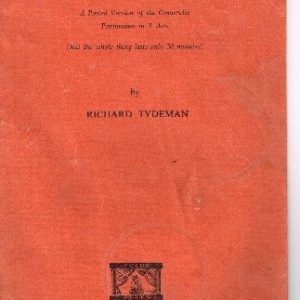