According to the programme notes, John Dighton’s well known and loved Comedy Farce – ‘The ‘Happiest Day’s of your Life’ -‘ had been in our minds a good number of times when play selection had been discussed, but that it was only after the stage was re-built that it had become a feasible venture’

The play has enjoyed a great deal of popularity ever since it first opened at the Apollo Theatre, London, in March 1948 – where it featured two well known actresses of that time.  Margaret Rutherford took the role of the formidable Headmistress – Miss Evelyn Whitchurch – and Molly Weir, as the impish Barbara Calhoun; these parts played in the MDC production by Valerie Poore and Jill Cooper respectively

It does, however, appear that the film contained a good many more parts than the original play with, in addition to Margaret Rutherford repeating her stage role, this including Alistair Sims as Mr Pond, Joyce Grenfell as Miss Gossage (no doubt giving a ‘frightfully’ good performance) and a certain George Cole – later of ‘Minder’ fame – as an Assistant Caretaker. Apparently the film  can still be seen on Youtube!

The action of the play takes place in the Masters Common Room of Hilary School for Boys in Hampshire where, unknown to the Headmaster and Staff, they are about to become a ‘Co -Ed’ – with Miss Whitchurch and her staff and pupils from their former Girls School, about to descend upon them in a mutually unwanted amalgamation.

The unfolding events become even more complicated by the arrival of the parents – with the respective Head Teachers trying to keep the new arrangements under wraps. As with all good farces the plot gets even thicker as, with the parents eventually discovering the truth and preparing to withdraw their children, news arrives that a third school is to be amalgamated – so, unavoidably, they find themselves joining forces to keep out the next batch of teachers and pupils! 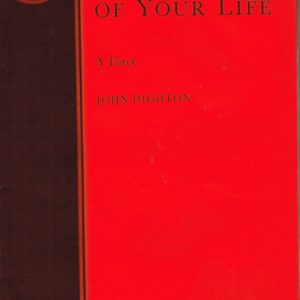 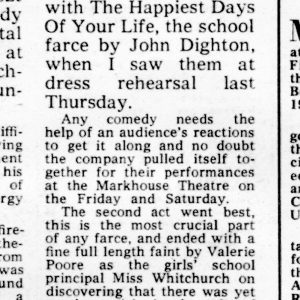 NEW – Guardian Report – The Happiest Days of Your Life