This moving One Act play by Michael Walker was chosen by the Drama Club for its entry in the 1964 Walthamstow Drama Festival.

This was a challenging play to perform and, perhaps, one of the most ‘serious pieces’ that the DC had tackled, as it dealt with some very contemporary and sad issues – as indicated in the Script Notes of:  ‘Scene: Either side of a wall dividing a city’ – Time: The present – Alas’

Despite the subject matter and the adjudicators encouraging remarks about how well the cast had created the ‘presence’ of a wall, and the attempted escape over it, without there actually being one within the set, the entry was unfortunately, for the second year running, just pipped at the post – as noted in the Walthamstow Guardian Newspaper Report reproduced below

Not all of the cast are recalled at this time but it is hoped that the ‘gaps’ will be filled in due course! 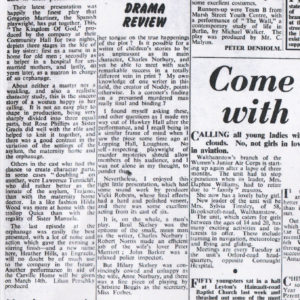 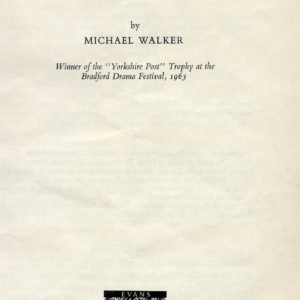 “St Peter’s in the Forest Youth Fellowship triumphed once again in the local round of the Youth Drama Festival held at McEntee Technical School, Walthamstow, on Saturday last.

Their performance of ‘Turn Right For Ponte Vecchio’ by T B Morris, in which Lesley Hamilton, Alan Rainbird, Judith Medland, Roger Gayler, Julie Overal and Janice Underdown took part, was placed first by adjudicator Mr K Collins, a new one allocated to the borough. In summing up he had special praise for an immaculate setting and some excellent costumes.

Runners -up were Team B from Marsh Street Youth Centre, with a performance of ‘The Wall’, a contemporary study of life in Berlin Wall’, by Michael Walker

The play was produced by Mr C Malyon”