A recent find in the Walthamstow Guardian Newspaper archives reveals that this One Act Play was the Drama Club’s entry in the 1962 Essex Drama Festival held at The Sir George Monoux Grammar School – where it did not, alas, win the Trophy!

The action of Conrad Carter’s –  ‘Breathes There A Man’ – takes place in the ‘extremely neatly furnished’ living room of the Medway’s Council House in the village of Shawburn. The time is the early evening 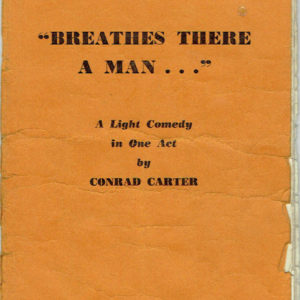