Under the ‘guise’ of ‘Marsh Street Youth Centre’ a goodly number of Drama Club members took part in this annual event – with really good results – as the following Newspaper Report from the Walthamstow Guardian shows! 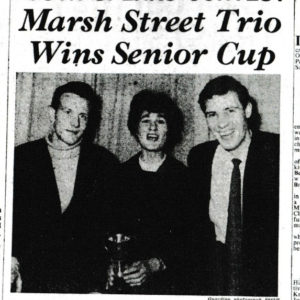 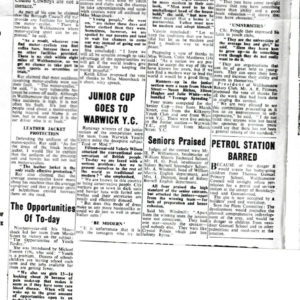 KEEN CHALLENGE BY MAKESHIFT TEAM FROM THE SAME CENTRE

Five minutes before the start of Friday night’s Youth Speaks contest in Walthamstow Council Chamber would be competitor Ray White found himself without a team. His two supporting speakers had not turned up, so he asked fellow Marsh Street Youth Centre members, Valerie Poore and Pat Payne to stand in

Despite this handicap, Ray, Valerie and Pat came within an ace of walking off with the coveted senior cup in the annual event sponsored by Walthamstow Rotary Club. They finished narrowly second to another Marsh Street team led by Iris Moorshack

As part of his case he claimed that the Borough Council did not provide any facilities for helping the motor cyclist. ‘There is nowhere in Walthamstow where motor-cycling sport can be exploited’ he said. ‘As a result wherever you find motor cyclists you find coffee bars, because there are no other facilities provided. There is no club within eight miles of Walthamstow, so we get no chance to take part in such sports as scrambles or trials’

Ray claimed that most accidents involving motor cyclists were not their fault. ‘The motor cyclist’ he said, is very vulnerable because he comes off easily. Although in Walthamstow the rate of motor cyclist accidents is high, it is not often his fault.. It is just that people read about a motor cyclist being injured and blame it on him, but in most cases it is the car driver who is at fault’

Ray also claimed that the average motor cyclist knew more about his machine than the average car driver and that a greater spirit of helpfulness existed between them on the road.

THE OPPORTUNITIES OF TODAY

She was introduced by Michael Everett (19) who said ‘Youth is a problem’. Dozens of schoolchildren are leaving school each term and the jobs available for them are getting fewer.

‘We see girls of 13-14 looking about 30 because of pale make up that makes it seem that they have some rare blood disease. When will we wake up to the great amount of opportunities open to us today’? Miss Moorshack outlined the opportunities available. She said ‘provided the political leaders are sensible, we have more chances to get on that any other generation. ‘Failure to pass the 11plus is of no significance these days. I know on one Secondary Modern School which has an extended course going right up to G.C.E. ‘A’ Level’

‘Some schools now provide vocational guidance lessons providing information needed in later life and most schools these days concentrate on tuition in at least one foreign language. This is essential if we are going into the European Common Market’

Opportunities for cheap travel abroad, the work done by youth centres and clubs and the chances to take apprenticeships and sandwich courses were all outlined by Miss Moorshack

‘Young People’ she went on, are richer these days and better clothed than they were. Sometimes, however, we are spoiled by our parents and tend to wait for chances to come our way instead of going out to find them.

Keith Elliot proposed the vole of thanks to Miss Moorshack in a short witty speech.

Runners Up in the Junior Section were a team from Marsh Street – Susan Riches, Eileen Hughes and Julie White – who handled ‘Teenage Spending’

There were 5 entries in the Junior Section – Warwick YC and 4 from Marsh Street YC.

‘Universities’ – Cllr Pringle then expressed his faith in youth clubs. ‘They are the universities of the average boy and girl’ he said. ‘Here they learn how to grow up – how to do something even though they do not want to do it. They are the organisations that can be of great help to youngster. They can open their horizons and increase their ability and esteem in themselves’