Eric’s son David was keen to share some thoughts of his father as he felt that he had ‘taught me so many things’ – with the best of these being ‘to encourage everyone – leave no one behind and make everyone feel special and, of course, to enjoy life – and the odd drink or two’

David told us that he didn’t know a great deal of his father’s early life, as Eric was 40 when he was born, and so he had not been very aware of his time teaching at Markhouse. But he was, of course, very aware of Eric’s sporting skills and that he not only played for Walthamstow Avenue, Barking and a number of Welsh Clubs, but also for the Spurs for a couple of seasons – although not making the first team as he was competing for his place with the legendary Cliff Jones!

After Markhouse, Eric lectured in law at the Walthamstow College which David said was a job that he really loved and although retiring in his early 60’s, he was often ‘called back’ for a day’s teaching or two! 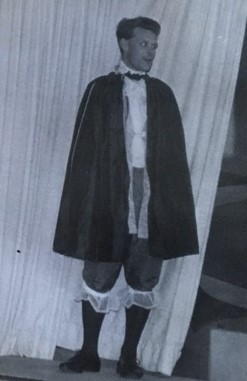 Many of the ‘football mad’ pupils at Markhouse will recall Eric’s prowess in the regular 5 A Side matches in the school playground, whilst others will no doubt remember his singing ability and a sense of fun that was so evident when he joined them in the cast of several productions – as evidenced in his authorship and starring role in the ‘staff led’ 1964 production of ‘Life is like That’ and, as our photograph shows, his ‘camio’ role as a Cavalier in ‘1066 And All That’.

David’s other comments were that Eric was very much a ‘people person’ who loved to make them laugh; also to tell his own stories including, when as a member of the West Essex Golf Club, how he often played a round with none other than his footballing rival – the above Cliff Jones!  We can only hope that Eric got the better of him on these occasions!