If you look at the ‘Captain Blood’ memorabilia in the Website’s Production Pages you will see that somehow he was persuaded get ‘front of stage’ and don a Guardsman’s Uniform – just so he could blast away at the audience for some reason that was doubtless nothing to do with the script – either covering a difficult scene change or, much more probably, just to ‘jazz up’ the production!

Whatever the reason there can be no doubt that Phil would have been chuckling away to himself about this while still managing to play; especially as his chosen uniform was portraying a level of grandeur well above the ‘other ranks’ stories he often relayed from his National Service days!

His subtle and clever delivery of whatever story he told, or his account of something that had happened or he had seen, was always of hilarious appeal to the listener. This was what Phil’s unique sense of humour and fun was about – which even was used to great effect in influencing some of our slapstick/visual and daft panto scenes – especially those we wrote or adapted ourselves. He somehow had the knack of quietly and carefully describing events – or in the case of the panto’s the skits/sketches being tried out – which always made them seem much funnier. This must clearly have been what he enjoyed doing and he doubtless knew how humorous his interpretations were; also that he made them that much better by only giving away a slight chuckle and a subtle grin. Those privileged to hear his stories from his work with the DHSS will know exactly what his sense of humour was capable of – he clearly had a unique way of ‘dealing’ with, and disarming, some of his more ‘interesting’ customers!

The other time Phil appeared on our stage was at a MDC social function, on trombone, with The George Thorby Big Band’ – who played for us at an amazingly low cost – doubtless Phil waived his fee!  It was a great evening and one can only hazard a guess about who told the rest of the Band about the costume room out back? The nett result of this ‘leak’ was the 20 odd performers returning from the interval wearing the proceeds of their rummaging activities. Needless to say the second half was a yet another Pantomime!!! 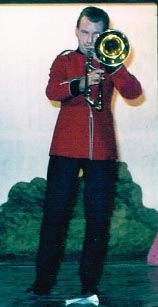 Playing in ‘Big Bands’ and his love of all things ‘jazz’ was an important part of Phil’s life and he complemented his main interest in the trombone (as shown from our picture of him rendering a suitably ‘historical number’ in ‘1066 And All That’) with that of playing the saxophone, guitar and harmonica. He amassed a vast collection of vinyl recordings of the musicians that he admired – including Spike Jones whose zany humour was something that always manged to get him rolling over with laughter. In later years, Phil became interested in the art of Bonsai – a seemingly quieter hobby, which some might think, he only ‘cultivated’ just to give himself a new outlet for his ‘descriptive humour’. Many friends were pleased to discover how funny taking a pair of scissors to a Bonsai could be!

Phil’s kind and thoughtful friendship will be missed by the many MDC members who knew him during the years that he and Norma were involved – and indeed through his more recent interest and attendance at the Re-Unions.  Phil was a quiet, kind and good friend – his sense of humour was, of course, a bonus!