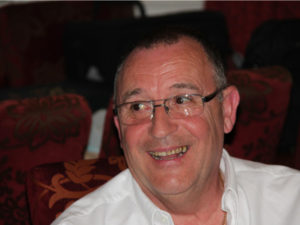 It seems inevitable that Ray would join the ranks of the Drama Club as, by the time he was old enough to do so, his family connections were well established – with his older brothers, Gerald and Gordon, already being regular and active members. It was probably just as inevitable that he would similarly follow them into the Sea Cadet Unit that they attended at Marsh Street Youth Centre

So Ray had no route for ‘escape’ (even if ever considered) and therefore set course on both his ‘nautical interests’ and the Drama Club’s world of ad libs, falling scenery and great fun!

Whilst having older brothers provided the necessary ‘in’ to the Drama Club, it may not have always been easy being some years younger and, on one occasion, Ray did recount that the only bit he didn’t enjoy while ‘tagging along’ was that when it came to the regular ‘football extravaganza’s in St James Park’, he was always being ‘put in goal’. His feelings were, of course, understandable, as in those days this was even worse than being told to play Left Wing!  Drama Club mythology suggests that he was told that this was undoubtedly the ‘cost’ of access’ when you’re 5 years younger. The actual comments made in Circa 1965 may, of course, have been a bit harsher!

However, despite his enforced goalkeeping, Ray quickly showed that he had the required ‘humour quotient’ for Drama Club membership and it was no surprise, all these years later, to learn that this particular trait had developed even further – especially that very ‘knowing’ half smile when he felt the need to add a bit of intrigue to his sense of fun!.

The signs of this were probably being developed around the time of the well documented incident in ‘1066 And All That’ – wherein Alfred’s ‘actual exploding cake’ nearly deprived the Drama Club of one co-member as well as resulting in a laundry bill from all those in the front row! An incident believed to be related to the seal of the explosive device having become over tightened – somehow?  As with ‘others’ known to be in the surrounding area at that time, Ray steadfastly declined to name names  – but that slight smile accompanying these well-rehearsed lines was still very much in evidence – some 50 years later!

Ray became a long serving and loyal member of the Drama Club and his lasting commitment to that period of his life was well in evidence in more recent years. Along with Sue, this was through his regular attendance of the re-unions and also through his enthusiastic involvement in the Cyril Malyon Memorial Fund after it was formed in 2013.

By this time Ray and Sue were living in Thorpe Le Soken and he had become a Community Support Officer with the Essex Police Force. It was through this work, and his positive approach to supporting young people, that one of the first CMMF Performing Arts Projects was undertaken. In fact, Ray was ready with his ideas for a project almost before the ink on the advertising material was dry!

Those former Drama Club members who were fortunate enough to still be in contact with Ray will have doubtless admired the person he had become some 50 or so years after their friendship began – particularly of his commitment to his family, to his community through his work with the Police and, indeed, for his continued sense of humour and enviable strength of character.

Many of Ray’s friends will understand exactly what is implied through these last few words.

He will also be fondly remembered by the way in which he ‘comes across’ in the documentary film of the CMMF Activity Project that he initiated.  This can be seen  under ‘CMMF Projects’ on this website and clearly shows his commitment to the lives of young people, and of Ray himself – which is why this has, in particular, been highlighted in this tribute to him

Many former MDC members will have their own particular memories of their friendship with Ray –  such as John Payne warmly recalling that after their first meeting (via their respective siblings forcing their enlistment to a two man cohort of Roman Guards), ‘He went on to play a great part in my life’.

Also of his great sense of fun – as in Alan’s account of them being asked by Cyril to nip up town and collect a Camel costume.

“we collected the costume and as Ray drove around Trafalgar Square I decided to wind the window down and shove the Camel’s head through it – much to the amusement of the crowds – and our own – so much so that Ray decided that everyone deserved an encore, or two, and so drove around the square a few more times until ‘the boys in blue’ began to take a bit more attention. At which point Ray decided to head north! Great times together – that was Ray for you”

One suspects that Ray had more than just a ‘half smile’ on his face at this time!