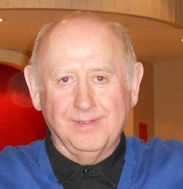 Dick was probably the longest serving member of the Drama Club and others may even have a view that, in both spirit and commitment, he never really left? Perhaps this was because most other members found him there when they joined, there when they left – and still ‘there’ and highly involved when the more recent series of Re-Unions began!

After the closure in 1977, Dick kept in regular touch with Cyril & Hilda Malyon and with many other formers members; both by direct contact with those more local to himself and through the various links and growing memorabilia on his ‘walthamstowhistory’ website.

Along with his quiet, friendly and unassuming manner, Dick will be remembered for his musical talents and his role ‘at the piano’ when song, dance and music was required – although it remains a mystery how he ever retained such calm and mannered traits when encountering the ‘suspect’ vocal ability amongst the rest of the membership. This particular memory of him does, of course, remain as a tribute to his patience!

It seems that Dick’s musical talents were well advanced before he reached Markhouse; also that these were quickly recognised and utilised! He once amusingly recounted, that this role, both for the school and the Drama Club, came about by being ‘caught in the act’ in the Upper Hall – whilst at the piano – without (he proudly added) the direct permission of the said instrument’s main custodian! Somehow he had contrived a playtime ‘tinkle on the ivories’ but was overheard by Bill Pinches – duly followed by that well known Markhouse phrase ‘what are you doing boy’  However, given the teacher involved, this was said quite politely and encouragingly!

Whilst Bill Pinches forte was PE & Gymnastics, he doubtless knew enough about music to know that Dick’s ‘tinkling’ was an advance on that usually heard at assembly. Dick, having then been worryingly summoned to Mr Smith’s office, found himself duly appointed as the new, permanent pianist – this as a result of a unanimous staff vote. Dick added that this included dear old Mr R.P – with their subsequent chat revealing that he was clearly not as precious about this role as might have been imagined! This was a very ‘Dick like’ story – very modestly described and underpinned with a subtle sense of humour

The role of school/drama club pianist, and then Musical Director, was one that was very special and it continued until the club closed. But this was not just Dick’s hobby and passion. It was also his profession and over the ensuing years he continued to teach many young people and adults – and enthuse them all with his love of music

In this way, like so many other former members, Dick gave a great deal back into his community and it was fitting that a number of his now ‘not so young’, and more recent pupils, celebrated their appreciation of him through a Memorial Concert in 2015

Although rumour has it that he was able to forget his lines and ad lib in true MDC style, unfortunately there is no recall of whether he could sing any better than the large numbers of ‘tone deaf’ members that he struggled so valiantly with over the years – musically that is!.

So – a person of some considerable creativity – but whilst he possessed all these skills, it was his quiet, friendly and kind personality that made him so popular with other members

In more recent years, when a spate of ‘secret enquiries’ began behind the backs of several  former members approaching a ‘certain age’, Dick, and his contact list, became a prized commodity as the younger generation sought the whereabouts of their parents long lost MDC friends! The same was true for the recent Re-Unions and similarly when the first thoughts were aired about recognising Cyril Malyon’s work at the Drama Club.

In the latter respect Dick enabled many former members to be found and this was clearly central to what eventually became The Cyril Malyon Memorial Fund – and so Dick, his list and his website were counted ‘in’- no argument!

Of course, Dick jumped enthusiastically on board from the start!

Dick’s contribution to the life of the ‘original’ Markhouse Drama Club, and its ‘rebirth’ some 40 years on, is marked through the dedication of the current website – recognising all he did to maintain the links and ongoing contact between former members since it closed in 1977. The website also fills a gap for those who did not hear Dick play, at first hand, in the post Drama Club years; in this respect including, in the ‘Memories Pages’, a link to an extract from his 2013 Charity Concert. This includes his favourite piece – Beethoven’s Moonlight Sonata!