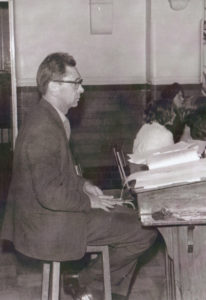 Just as the next issue of additions to the website memorabilia was being finalised, an eagerly awaited parcel of ‘new goodies’ arrived from John & Jill Payne in Leeds – this care of their latest garage clearance prior to their forthcoming ‘return’ south!

All of the items that John and Jill sent down will appear in the website over the next few months, but as a number of previously unlisted plays were part of their ‘find’, these have been added to the main Productions listing straight away – in the hope that seeing these ‘new’ titles might trigger some early responses about the respective production dates and cast details etc!

The new batch of Website additions includes this recently discovered photograph of ‘Mr M’ at his desk – clearly concentrating in ‘Producer Mode’.

This photograph has also been added to the ‘Staff Gallery’ in the Markhouse School pages!

Newspaper Cuttings from The Walthamstow Guardian

Cast and/or character lists, and some programme notes, have been updated and/or added for the following plays:

In addition to the above photograph of ‘Mr M’ at his ‘Producers Desk’, the Staff Gallery’ now shows a recently found newspaper cutting, and photograph, from the Walthamstow Guardian of Les Smith; this reporting on his pending Lecturing Tour of America – no doubt well and truly prepared to let his future audiences know all about the achievements at Markhouse!

There are a couple of recent changes to the website itself and the first of these is on the Home Page, where you will now find a separate ‘Newsletter’ link. This contains a list of the edited versions of the earlier CMMF Newsletters – each with an initial note of the main information and/or features included. Whilst some of their content is likely to be found, updated, in other pages, there are a number of items which we felt were important to retain in their unedited form – particularly those ‘thoughts and memories’ in the January & May 2015, and the November 2016 Newsletters,  of those former members who are sadly no longer with us.

The Contact Page has also been revised and this can now be used in regard to anything about the website, the forthcoming Re-Union, the CMMF and, of course, the links with former members.

The earlier email addresses given for John and David are still operative, but these will be deleted once all the final arrangements are made for a new MDC email address